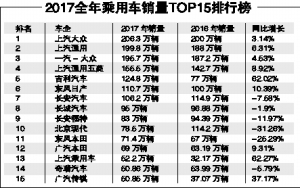 The company has already closed in 2017. For the Chinese auto market that is still "running ahead", some people are happy to see that someone is stunned. Judging from the scope of the generalized passenger car, 46 out of the 83 automobile enterprises in the country showed a growth trend, 32 companies fell, and 5 companies had no sales in the same period. Specific data show that the 2017 total sales of passenger cars in the top three are still controlled by SAIC-VW, SAIC GM, and FAW-Volkswagen. The cumulative sales of SAIC-GM-Wuling, Geely Automobile, Dongfeng Nissan, and Changan Automobile, which ranks 4-7, are also cumulative. More than one million vehicles.

In addition, it is worth mentioning that in 2017, the self-owned brand car companies made significant achievements. In addition to Geely Automobile, Changan Automobile, and Great Wall Motor, which were listed in the TOP15 list in 2016, SAIC Motor, Chery Automobile, and Guangzhou Automobile sold three companies, a total of six independent brand car companies beyond the joint venture brand to enter the TOP15 ranking list. Of these, Geely Automobile, SAIC Motor Passenger Vehicles and Guangzhou Automobile Chuanqi were among the ranks of the annual dark horse with 62.02%, 62.27%, and 37.17% of eye-catching growth, respectively, and became an important force for driving the growth of the auto market.

Reasons for winning: With many brands failing to meet their annual sales targets, they dare to get their transcripts out of the sun. Dongfeng Nissan completed its annual target in advance and became a star in the brand of passenger cars.

Reasons for winning: Starting in 2015, the Japanese brand's performance in China was fully recovered. According to the data from the Federation of Travel Unions, in 2017, the Honda brand surpassed other competitors and achieved a year-on-year increase of 15.5% with sales of 1,441,300 units, making it the throne for sales of Japanese brands in China. Among them, as one of the most important joint venture companies, Guangzhou Automobile Honda achieved 690,700 sales last year, an increase of 9.31% year-on-year, setting a record high sales record.

In-depth analysis, in fact, Guangzhou Automobile Honda did not introduce new models in 2017, but only a few regular annual remodel models. In addition, since Civic and CR-V, the two most-demanding A-class vehicles and compact SUVs, were all handed over to Dongfeng Honda, the final annual sales were only lagging behind more than 20,000 units of brother-in-residence companies and the various models of Guangzhou Honda. Competitiveness can be seen here: The annual sales of the six ace models are over 100,000. Guandao, Accord, and Binzhi have become the most popular models in this market segment, making Guangqi Honda keep its sales volume up for 12 consecutive months. At the same time, far beyond the level of 2016 throughout the year.

Reasons for the award: In 2017, the self-owned brand car companies made significant efforts, and Guangzhou Auto Transmission Co., Ltd. became the independent brand that surpassed the joint venture brands to enter the TOP15 ranking. Data show that in 2017, Guangzhou Automobile's total sales volume reached 508,600 units, a substantial increase of 37% year-on-year, not only in the self-employed performance, but also far away from a number of joint venture brands, far exceeding the industry average level.

With the successful listing of the GM8, GAC Chuanqi will complete the "3-8 launch" strategy in 2017. In the past year, GAC, GS8 and GM8 represent the opportunities and challenges for GAC Motors. The three vehicles represent the highest level of self-owned brand design and manufacturing. In addition to GM8, there are GS3 and GS7 in 2017. Several new models were added to GAC's product matrix. At present, Guangzhou Automobile Group has achieved full coverage of cars, SUVs, and MPVs.

At present, Guangzhou Auto Transmission Co., Ltd. can be said to have embarked on a fast-rising channel. In the 10th birthday year, Yu Jun, general manager of Guangzhou Automobile Group Co., Ltd. announced the companyâ€™s product plan: â€œWe will introduce four new vehicles to further improve The product matrix strives to achieve a production and sales target of 1 million units by 2020. It is understood that in the first half of 2018, GAC Chuanwei will also establish a North American sales company and a Hong Kong trading platform. In the face of the new trend of domestic economic restructuring and the upgrading of auto consumption, Guangzhou Auto Transmission Co., Ltd. has set an exemplary role and continuously produces excellent models to break through the ceilings of its own brand models. The future is even more worth looking forward to.

Reasons for winning: Sales surged by 60%. Geely was the largest black horse in the auto market in 2017. Under the momentum of the auto market's slight growth, the double-digit increase in pre-judgment also demonstrates Geely's confidence in 2018.

Sales volume data shows that Geelyâ€™s total sales in 2017 exceeded 1.247 million units, a surge of 63% year-on-year, an average increase of more than 20 times over the industry, and an over-subscription of 1.1 million units.

From the perspective of market segments, Geely Automobile seized the upsurge of SUVs and did a good job in each product. Geely SUV camps were formed by Bo Yue, Dorsett GS, Vision SUV, Vision X3 and Vision S1. "Explosive money" has become Geely's biggest sales growth in 2017. In particular, Geely Bo Yue, in December last year, sales reached 31,205 units, an increase of 53%, sales exceeded 30,000 for three consecutive months, the cumulative sales of 282,900 units throughout the year, a strong entry into the first lineup of SUV.

In 2018, the sales target of Geely Automobile is 1.58 million vehicles, which means that on the basis of 2017, its sales volume will have to increase by 30%.