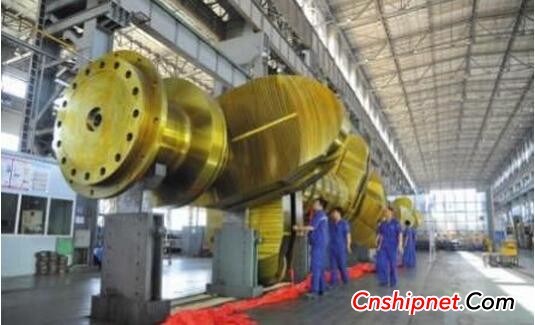 This heavy crankshaft of Dalian Heavy Industry has a total length of 12.575 meters, a full stroke of 3.72 meters, a rotating diameter of 4.74 meters and a weight of 237.131 tons. It will be equipped with Dalian Marine Diesel Engine Co., Ltd. Marine low-speed diesel engine, and finally installed in a 319000 load built by the Big Ship Group. Tonne tanker. The 760 test data of this crankshaft all meet the highest international standards.
It is understood that only Japan's Kobe Steel and South Korea's Doosan Heavy Industries and Hyundai Heavy Industries have the processing capacity of this type of crankshaft. Dalian Heavy Industry has become the only company in the world that can produce such a super-stroke crankshaft.
It is reported that the crankshaft is the core component of a large marine diesel engine. It is usually not replaceable within the 25-year service life. It has the characteristics of heavy weight, high precision and complicated manufacturing process. In the past ten years, Dalian Heavy Industry has mastered the world's highest-end marine crankshaft production technology. Its product development capability covers more than 50 grades of Mann series and 52 grades of WÃ¤rtsilÃ¤ series, achieving serialization and batching of extra large crankshafts with international leading level. The production quality has been highly recognized by users, ensuring that all 905 test data have reached the design patent company standards and the classification society technical conditions, and the market share has increased year by year, becoming a world-class crankshaft development base. It has completely broken the long-term monopoly of large-scale low-speed marine crankshafts on China's shipbuilding industry. It has successfully become one of the world's top four in the super-large crankshaft manufacturing industry, and has made the bottleneck of â€œships, machines and other axesâ€ restrict the development of the national shipbuilding industry.
At present, the specifications and models of Dalian Heavy Industry crankshaft products are second to none in domestic enterprises. In the first half of this year, Chinese shipyards accounted for 2/3 of the world's orders, far ahead of other countries, and mostly large and super large, while the large crankshaft market of more than 200 tons was basically monopolized by Dalian Heavy Industry. Liu Tiebo, deputy general manager of China Classification Society Dalian Branch, said that Dalian Heavy Industry's crankshafts have reached the international leading level in terms of product quality and technical capabilities. The large crankshafts such as the crankshaft and super long stroke crankshafts have been rolled out successively, which represents Dalian Heavy Industry. The crankshaft is a leader in the world's marine crankshaft manufacturing industry.